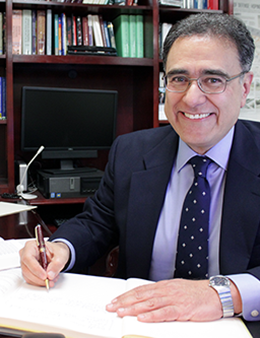 Dr. Ayyub’s main research interests and work are in risk, resilience, sustainability, uncertainty and decision analysis, applied to civil, infrastructure, energy including renewables, defense and maritime fields and climate-resilient infrastructure. Professor Ayyub is a distinguished member of ASCE and an honorary member of ASME. He is also a fellow of the Society of Naval Architects and Marine Engineers (SNAME), the Structural Engineering Institute (SEI), and the Society for Risk Analysis (2017-18 Treasurer), and a senior member of the Institute of Electrical and Electronics Engineers (IEEE). Dr. Ayyub completed research and development projects for governmental and private entities including NSF, DOD, DOT, NIST, DHS, and leading insurance and multinational corporations worldwide. Dr. Ayyub is the recipient of several awards, most recently the 2018 ASCE Alfredo Ang Award on risk analysis and management of civil infrastructure, 2019 ASCE President Medal for many efforts to bring adaptive design to the profession to help address a changing climate, 2019 ASCE Le Val Lund Award for contributions to resilience enhancement and risk reduction for lifeline-networked systems through measurement science and associated economics toward informing policy and decision-making practices, 2018 ENR Newsmaker award for passionate effort to give engineers their first formal guidance when designing infrastructure to be more resilient to weather extremes, and 2016 ASNE Solberg Award significant engineering research and development accomplishments in the field of ship survivability.

Load and resistance factor design (LRFD) reliability-based design methods for piping were developed for nuclear facilities. This multi-year effort resulted in a draft code case being considered by the ASME Codes and Standards Committees. LRFD design methods are available in several papers of the ASME Journal of Pressure Vessel and Piping.

The development of reliability-based design criteria for surface ship structures needs to consider the following three components: (1) loads, (2) structural strength, and (3) methods of reliability analysis.  A methodology for reliability-based design of ship structures was developed and implemented.  The methodology consists of the following two approaches: (1) direct reliability-based design, and (2) load and resistance factor design (LRFD) rules.  Reliability-based design rules were developed at several levels of structural systems that include the hull-girder, grillage, panel, plate and detail levels. This multi-year effort contributed towards the development of the American Bureau of Shipping Rules for the U. S. Navy.  Fatigue design in these rules are based on products from this research effort that first appeared in the special issue of the American Society of Naval Engineers Naval Engineers Journal.

A steel box structural design has been traditionally used for bridges and surface marine vessels and is on the basis of engineering experience/judgment and deterministic approaches, such as working stress design. Recent developments in reliability-based design have lead to the development and application of the load and resistance factor design (LRFD) approach, in which inherent uncertainties are accounted for in an indirect manner. Structural optimization algorithms and tools have also seen an increased application in the area of structural design in the context of weight reduction, cost savings, and other design improvements. A three-step strategy for the design of such structures was developed, which combines the innovative aspects of both reliability-based methods and structural optimization theories and algorithms. After selecting an initial design as a starting point, the methodology then improves on this through deterministic optimization, in which design variables, objectives, and constraints are defined in a purely deterministic manner. Concerns regarding major components, selected configurations and layouts, loading, and design objectives/constraints can be addressed at this point and the process can be repeated if necessary. This deterministically predicted optimal design is then used as the basis for reliability-based optimization, which is the final step of the methodology, in which design variables, objectives, and constraints are defined in a probabilistic context. Through its ability to account for uncertainties, a reliability-based framework greatly complements any deterministic prediction. The methodology has been applied to the design of two typical surface vessels as examples: one simple and one complex.

This research track resulted in a methodology for the structural reliability analysis of marine vessels based on failure modes of their hull girders, stiffened panels including buckling, fatigue, and fracture and corresponding life predictions at the component and system levels.  Factors affecting structural integrity such as operational environment and structural response entail uncertainties requiring the use of probabilistic methods to estimate reliabilities associated with various alternatives being considered for design, maintenance, and repair. Variability of corrosion experienced on marine vessels is a specific example of factors affecting structural integrity requiring probabilistic methods. The structural life assessment of ship hulls methodology developed produces time-dependent reliability functions for hull girders, stiffened panels, fatigue details, and fracture at the component and system levels. The methodology was implemented as a web-enabled, cloud-computing-based tool with a database for managing vessels analyzed with associated stations, components, details, and results, and users. Innovative numerical and simulation methods were developed for reliability predictions with the use of conditional expectation. Examples are provided to illustrate the computations.

Department faculty, staff, and students were highly active at the Transportation Research Board (TRB) Annual Meeting.

The list recognizes service to the construction industry and the public.

The final report is expected to be released in late 2018.

The division develops resources for improving the hazard resilience of civil infrastructure and lifeline systems.

In the society’s 165-year history, less than 700 civil engineers have been elected to this honor.

The civil engineering professor is also the director of the Center for Technology and Systems Management.

The CEE professor will serve as treasurer through 2019.

CEE Professor offers expert insights on what it means to be resilient.

New journal on Risk and Uncertainty in engineering is the first to be jointly produced by ASCE and ASME.

The study, led by Bilal Ayyub of the University of Maryland, found that even if sea level rise turns out to be at the very low end of projections, it would still cause significant damage in Washington

His presentation was on “Uncertainty Sources, Types and Quantification Models for Risk Studies".

This seminar on “Uncertainty Sources, Types and Quantification Models for Risk Studies“ provides an overview of risk analysis and management to examine knowledge reliability based on ignorance and uncertainty analyses.

The certificate is for Dr. Ayyub's dedicated voluntary service 2009.

Mr. McGill is working on risk analysis for the protection of critical infrastructure funded by the Maryland Emergency Management Agency