Xiaocen Liu and Yuan Xue have been named the 2017 winners of the Department of Civil and Environmental Engineering (CEE) M.S. and Ph.D. awards, respectively. The competitions recognize the scholarly excellence and achievement of graduating master’s and doctoral students based on a review of writings and accomplishments, as well as an oral presentation.

The winner of each award receives a cash prize and advances to the college-wide competitions.

A native of northern China, Liu began her tenure as a CEE master’s student unsure of where the program would take her. It was while working with environmental engineering professor Birthe Kjellerup that she discovered an interest in wastewater treatment.

Her thesis project pinpointed and posed solutions for some of the limitations to boflocculation—the clumping of organic particles by bacteria and algae—in DC Water’s Blue Plains Advanced Wastewater Treatment Plant. Improving this process means cleaner effluent flowing into waterways and more biosolids to be recycled as agricultural fertilizer.

The project began last summer with an internship at DC Water.

Ph.D. Award recipient Xue’s research also deals with water—albeit at an earlier stage of the cycle.

For the last five years, Xue and professor Barton Forman have worked to stitch together snowpack data from satellite images and global models to more accurately determine the mass of snow on earth and estimate how much water will be released when it melts.

“Accurate information about water availability through snow melt is very important for regional and continental water resource management,” said Xue, a recipient of the NASA Earth and Space Science Fellowship and an A. James Clark School of Engineering Future Faculty Fellow. “Roughly a sixth of the world’s population relies on snow and ice melt for drinking water, agriculture, and energy.” 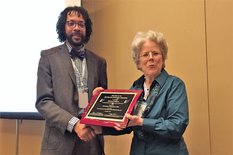 Congratulations to Civil and Environmental Engineering’s 2020...