A nine-year partnership between environmental engineers at the University of Maryland (UMD) and the U.S. Department of Agriculture (USDA) has given engineering students the rare opportunity to directly advance efforts to safeguard the environment from historical contamination.

Department of Civil and Environmental Engineering Professor Alba Torrents and her lab joined other contractors working at the 6,500-acre Beltsville Agricultural Research Center (BARC) Superfund site in 2008. The center was placed on the U.S. Environmental Protection Agency’s National Priorities List in 1994 due to historic areas of concern that required investigation.

“We are down to the really challenging sites—what we could consider the most difficult from a technical approach,” said Dana Jackson, a professional geologist and the USDA Agricultural Research Service Superfund project manager who oversees BARC restoration efforts. “That’s when I was informed there might be expertise within UMD that might have the interest and capacity to work in concert with us. With that special expertise, we have begun to solve many of the problems.”

“A lot of people are doing this type of work,” added Torrents. “But a successful, long-standing partnership between industry, the federal government, and a university like what we have is hard to find.”

Their collaboration has focused on two projects.

At the site of a former research orchard, Torrents, Natasha Andrade B.S. ’05, M.S. ’08, Ph.D. ’12, Marya O. Anderson M.S. ’13, and a group of students have been examining better ways to characterize and reduce the threat of historical DDT to local wildlife.

“The DDT bioaccumulates in earthworms and can move into the tissues of birds and other animals that eat the contaminated worms,” said Zijiang “River” Yang, a Ph.D. student on the project. “We are trying to determine if the wildlife is at risk from the DDT-contaminated soil and, if so, what we can do to mitigate that.”

Ecological risk assessments like this are extremely labor and time intensive. But Yang is working to develop an easier approach that would allow researchers to infer the threat DDT poses to birds and other animals based on soil tests alone.

“If we can determine the mathematical rate at which DDT concentrations change from soil to worm and worm to bird, we can determine how much DDT is accumulating in animals without having to sample them directly,” he explained.

To do this, Yang will first have to develop a sampling strategy that accurately characterizes the range of DDT levels in soils across the 3-acre orchard.

The final design could also be used by researchers and officials tackling DDT contamination elsewhere.

The second UMD-affiliated project is located at the Beaver Dam Road construction debris landfill, which closed in the 1980s. There the team is focused on preventing trichloroethylene (TCE), an industrial solvent found in the groundwater, from entering the headwaters of Beaver Dam Creek and an adjacent wetland.

But breaking down TCE can be tricky. Because some of the byproducts are actually more toxic than the original chemical, the team also decided to investigate whether the barrier could be seeded with a microbial community capable of degrading the solvent completely.

Gabriela T. Niño de Guzmán Ph.D. ’17 and others would spend the next four years determining the best fill mixture, cataloging local soil bacteria, confirming the habitability of the barrier, and identifying an interim food source to boost the microbial population and activity critical to TCE degradation.

“Glycerol proved to be an easily accessible food source for the microbes. The mulch and other materials we use for the structure do not break down fast enough for them to use as food,” she said. “Glycerol is also cheap and very widely available.”

The next step will be to seed the barrier and monitor its impact on the chemical’s concentrations in the outflowing water—a process that has itself been enhanced by UMD students.

Early in the project, Daniel Michaelson M.S. ’12 discovered that the efficacy of similar structures nationwide is measured by collecting groundwater samples upgradient and downgradient from the barrier without allowing enough time for the groundwater to pass through—an approach that doesn’t provide the level of detail needed to meet regulatory cleanup goals.

The findings led to a specialized network of sampling wells installed at the center of the TCE contamination and inside the barrier to ensure the team captures the actual degradation power of the barrier and microbes.

“These projects complement our research programs in developing natural resource management strategies and assessing conservation practices,” said Hapeman. “This has been and continues to be a rewarding relationship for all involved.” 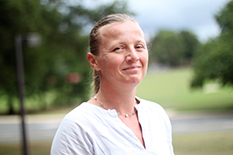