A historic opportunity exists for states and the nation as a whole to make urgently needed improvements to transportation infrastructure, according to speakers and panelists at the Build Infrastructure Better Symposium, held at the University of Maryland (UMD) on Monday (April 11). 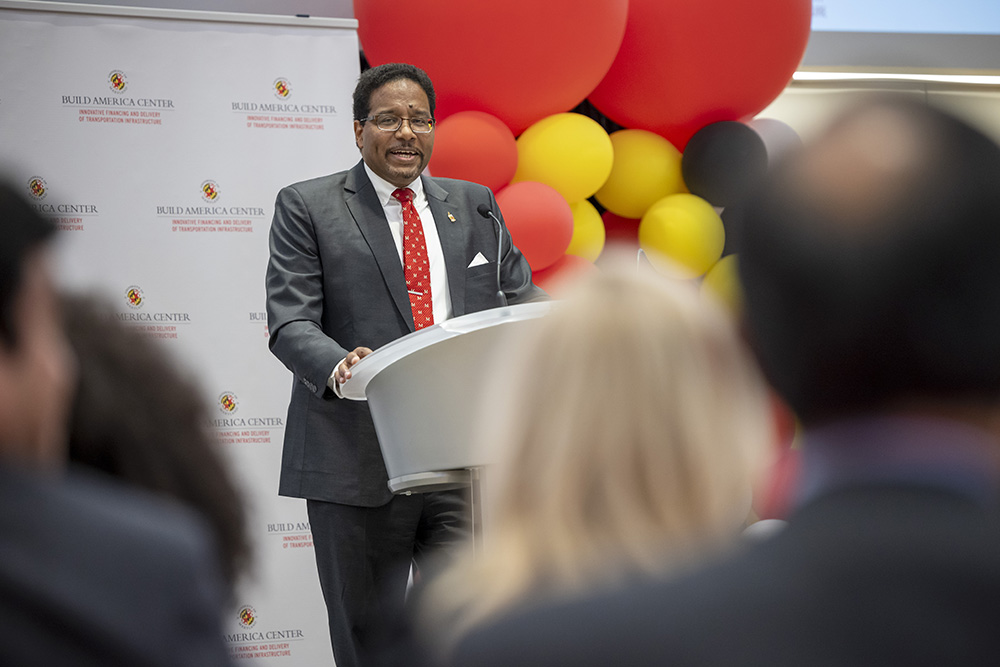 “If we are going to solve the grand challenges of our time, from climate change to social inequality, it will demand imagination and innovation in our infrastructure, from design and materials to financing, to technology and building longer lasting strategies,” said UMD President Darryll J. Pines at the Build Instructure Better Symposium on April 11. [Photo credit: Stephanie Cordle]

The symposium, which featured two expert panel sessions, doubled as the official launch ceremony for the Build America Center, a new hub established at the UMD civil and environmental engineering department in partnership with the Federal Highway Administration and the Build America Bureau. The center director is Qingbin Cui, a UMD professor of civil and environmental engineering who is considered a leading expert on highway project financing. 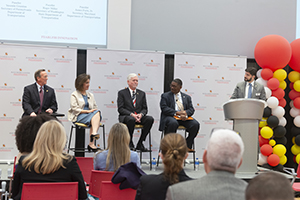 Carlos Monje, under secretary of transportation for policy at the U.S. Department of Transportation, delivered a video keynote address, noting the important role to be played by the center in assisting regional, state, local, and tribal authorities as they implement landmark infrastructure legislation adopted by Congress in late 2021. “The new center is a critical tool to deliver meaningfully better projects,” Monje said.

The legislation, known formally as the Infrastructure Investment and Jobs Act but widely referred to as the Bipartisan Infrastructure Law, provides $1.2 trillion in funding to help rebuild and renovate highways, roads, and bridges, spur more widespread use of electric vehicles, and ramp up public transit. The Build America Center, led by UMD in partnership with Georgia Tech, Purdue, Virginia Tech, and Stanford, will advance the process by providing technical assistance and expertise to authorities seeking to make the most effective use of the available funds.

“The center will complement the work of our five regional infrastructure accelerators all across the country to create technical capacity for project sponsors, particularly in rural and tribal areas, and to assist them to think outside of the box and explore innovative approaches to fund and deliver shovel-worthy projects,” Monje said.

“The center will complement the work of our five regional infrastructure accelerators all across the country to create technical capacity for project sponsors, particularly in rural and tribal areas, and to assist them to think outside of the box and explore innovative approaches to fund and deliver shovel-worthy projects."

Carlos Monje. U.S. Under Secretary of Transportation for Policy

Such approaches include public private partnerships (P3) as well as credit and grant programs accessible through the Build America Bureau, a federal agency with responsibility for spearheading transportation infrastructure projects.

In rebooting the nation’s infrastructure, decision-makers cannot simply “build it the way that it was,” Farajian said, urging decision-makers to explore “cutting-edge technologies and innovative funding and financing options that may be different from what we used to see in the past.”

The opportunities provided by the bipartisan infrastructure bill also come with enormous responsibilities, Bezio noted in his remarks.

“Cities, towns, counties, towns, and tribes will all get millions of dollars in access to discretionary grants,” Bezio noted. “Each new grant recipient will need to manage the many financial and project management responsibilities that come with federal aid dollars. This is where the center can play a very significant role in helping to deliver the program. Another challenge is managing these funds and delivering the most value as soon as possible.”

Also speaking at the event were Alba Torrents, interim chair of the UMD civil and environmental engineering department, and Maryland Engineering’s Dean Samuel Graham, Jr., who pointed to the pace-setting transportation resources available at UMD, including the Maryland Transportation Institute and the Center for Advanced Transportation Laboratory, which hosts the world’s largest transportation database.

UMD President Darryll J. Pines, meanwhile, noted that infrastructure improvement is among “the grand challenges of our time,” which also include climate change and social inequality. Solving these challenges “will demand imagination and innovation in our infrastructure, from design and materials to financing, to technology and building longer lasting strategies,” Pines said.

The panels were moderated, respectively, by Farajian and Sullivan.