University of Maryland (UMD) researchers make breakthrough discovery in graphene research that could provide a testbed for understanding how electrons move in extremely high magnetic fields. Since its discovery in 2004, graphene has become a celebrity in the materials science and physics world due to its remarkable physical properties.

One of the thinnest and strongest materials ever made on earth with incredible powers of conductivity, graphene has quickly become one of the most versatile materials discovered. Graphene-related research is fueling potentially revolutionary new applications in everything from faster electronics, wearable technology and smart clothing to better energy storage, sensors and medical devices. And now, mechanical engineers at the UMD may have found a way to make it even more powerful.

Graduate student Shuze Zhu and Associate Professor Teng Li, along with National Institute of Standards and Technology (NIST) collaborator Joseph Stroscio, have developed a theoretical model that demonstrates how to shape and stretch graphene to create a powerful, adjustable and sustainable magnetic force.

When stretched, or strained, graphene's electrons behave as if they are in a strong magnetic field. This so-called pseudomagnetic effect could open up new possibilities in graphene electronics, but so far, researchers have only been able to induce such pseudofields that have been highly localized and need peculiar loading conditions that are prohibitive to realize in practice. However, Maryland researchers may have explained how to shape a graphene ribbon so that simply pulling its two ends produces a uniform pseudomagnetic field. And with current nanofabrication technologies, the team is confident that they will soon be able to transition their theoretical model to a design reality. 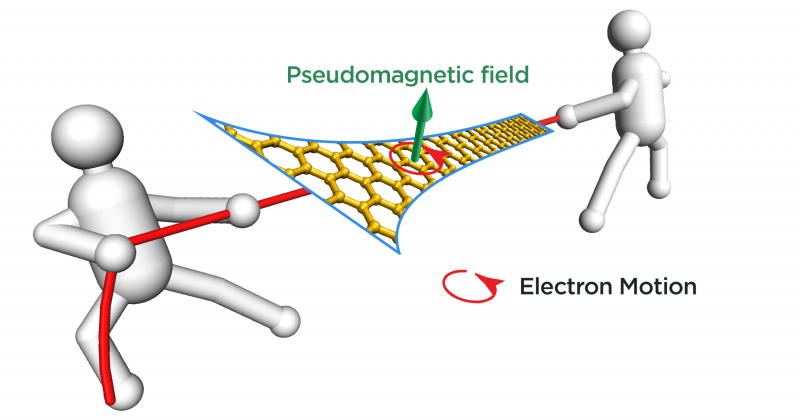 Illustration shows how applying a simple stretch to a specifically shaped sheet of graphene creates a stable and controllable pseudomagnetic field.

In 2010, researchers accidently discovered that when handling a two-dimensional lattice of graphene, a tiny triangular, bubble shape created in the material caused a pseudomagnetic field in the tiny bubble as high as 300 Tesla—well beyond what can be attained with stable laboratory magnets. The current record for a lab-produced magnetic field is only 85 tesla for less than a small fraction of a second.

While it seems simple enough to stretch a material in two directions—like tugging on the ends of a rubber band—the team discovered that the graphene sheet needed to not only be stretched, but that the sheet must also be shaped in a specific way. A simple rectangle or square of graphene, when stretched, would not create a pseudomagnetic field.

But, when the graphene was formed into a tapered shape like a trapezoid or pennant, pulling on the ends produces a strain that steadily increases along the length of the ribbon, and this constant strain gradient gives a uniform, and controllable, pseudomagnetic field. And the more strain applied to the material, the greater the magnetic force. The team’s model, which was verified across three computational models, predicts a tunable field magnitude from zero to 200 Tesla.

This type of controlled pseudomagnetic field creates the potential for new ways to study the motion of electrons in a controllable high magnetic field. Currently, there is no sustainable method for generating magnetic fields of this magnitude. The induced fields – if made more spatially uniform – could potentially enable new concepts of electronics, such as “valleytronics,” in which electrons separate between different valleys in the graphene band structure.

Physical Review Letters published the team's research, "Programmable Extreme Pseudomagnetic Fields in Graphene by a Uniaxial Stretch," on December 11, 2015. Their work was selected to be the cover feature and highlighted as an “Editors’ Suggestion” in Physical Review Letters. It was also featured on the Applied Physics Society's Physics site.