Transportation and emergency management agencies throughout the Mid-Atlantic region had a high-tech edge coping with this season's blizzards - an advanced visualization and data fusion system developed at the Clark School. The service will be made available to the general public in the future.

The technology gave hundreds of officials at command centers and in the field a consolidated real-time stream of traffic, accident and weather information from dozens of sources, all displayed on a single screen. Field personnel using a special "hardened" technology got the data in their vehicles and filed real-time reports that instantly updated the system.

Both technologies were developed and are operated by the University of Maryland's Center for Advanced Transportation Technology (CATT), part of the Clark School of Engineering's Department of Civil and Environmental Engineering.

"RITIS really came into its own during this crisis," says principal investigator Michael Pack, who directs the CATT Laboratory. The system got its first widespread trial run during last year's presidential inauguration.

"Many transportation and safety officials now use RITIS every day, but the numbers really went up during the blizzards as more emergency management organizations took advantage of the technology," Pack says.

The system's Web site logged over 1.2 million hits during and after the two major snowstorms from approximately 600 visitors, mainly emergency operations, safety and transportation officials from the District of Columbia, Maryland, Virginia and Pennsylvania, according to Pack.

Hundreds of additional field personnel accessed the system feed through the CapWIN Mobile Client - portable, two-way communication technology that CATT operates in conjunction with a coalition of the region's transportation and safety officials.

"We could actually see our system on live television during near round-the-clock coverage from the Maryland State Highway Administration headquarters. It was prominently displayed on large screens in the Statewide Operations Center, and it could often be seen over the shoulders of reporters and even behind Governor O'Malley."

Even at the height of the storm, the CATT Lab was staffed by employees and trained students. When one server failed, they managed to by-pass it and restore service, even though some key personnel were snowed in at home.

"We knew there were a good number of emergency first responders counting on us, and we didn't want to let them down," Pack says. "From feedback, we know we're doing a great deal to facilitate communications and response at all levels of government in this region and across many disciplines."

The RITIS real-time display gives emergency personnel both the big picture and lots of detail.

"We monitor traffic conditions throughout the region via sensors embedded in the pavement," Pack explains. "We monitor commercial vehicles outfitted with GPS to get a sense of travel times up and down the east coast from New Jersey to South Carolina. We monitor accidents on the road and display them via sophisticated graphics, including detailed information about who is responding, what is being done to fix the situation and the effects on traffic. Our display includes detailed weather data, as well."

This information is then fed to a wide array of agencies throughout the region to help them make informed decisions on how to respond to the situation, coordinate their efforts and better inform the public.

Hundreds of first responders in the field use the CapWIN Mobile Client to communicate using real-time data communications and to access critical operational information through their mobile computers.

"The technology is two-way," explains Roddy Moscoso, CapWIN deputy director. "During the blizzards, CapWIN users not only accessed the RITIS feed, they created incident reports and updated the data. The bottom line is that law enforcement and transportation first responders had enhanced coordination capability."

The CapWIN Mobile Client is designed for the special demands of field use and includes detailed mapping capabilities that display RITIS events, live traffic data and road temperature. Users in the field can file reports giving the emergency management centers a first responder's view of the situation on the ground.

While anecdotal evidence of the system's impact is beneficial, Pack says it's important to quantify the true value of the system.

"It's challenging to put a dollar figure on technology that provides quicker, more detailed information and enhanced cooperation among dozens of agencies," Pack says. "Even so, we do have analysts working to assess the benefits of the RITIS system and the enhanced situational awareness it provides emergency agencies. It's clear from the initial cost-benefit analysis that the system represents an effective investment that enhances safety and mobility in the entire Washington Metropolitan Area."

Pack expects to have dollar estimates available in the following months.

Also, plans are underway to make the RITIS system available online to the general public within the next 12 months.

The CATT Lab, part of the Clark School of Engineering, gets its funding from Maryland and other participating states, the federal government and private sources.

View the UM press release on this technology online. 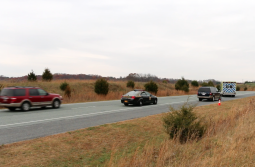